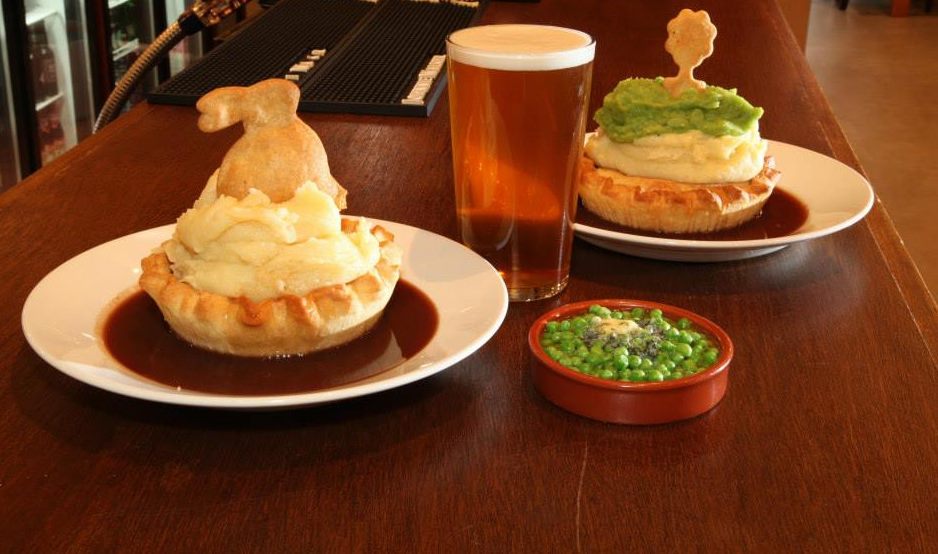 There are two things that any person who considers themselves a northerner loves–Pie and Ale. Pies are the holy grail of sweet and savory, and the true pinnacle of culinary excellence. It’s a meal that’s self-sufficient in its humble, edible, delicious housing. And there could be no more worthy accompaniment for this culinary delight which has satisfied the appetites of folks craving a filling, compact and delicious dish for many generations, but ale. Yes, ale. A single syllable, or two depending on where you hail from. Best enjoyed by the gallon and no mucking about. If you ever fancy a pointless-but-exciting south-vs-north bickering debate, ‘Who owns that pie?” is as good a topic as any. Sitting amid eels and oodles of meat liquor, a pie is undoubtedly a quintessentially cockney meal. Yet, few can dispute that Wigan, which hosts the World Pie Eating Contest, is the world’s pie capital. Such bickering would be pointless since the practice of encasing protein in pastry is as old as civilization. Not unlike Ale.

So, what’s the ideal place for a northeastern lad in the northwest to explore? Somewhere that could bring us all together without border-divides? A place where we can simply think of ourselves as northerners?

Ladies and gentlemen, please allow me to present Pie & Ale.

Stemming from Bakerie and situated a couple of seconds behind it in Manchester’s Northern Quarter, the Pie & Ale restaurant is an awesome gastro-pub which can be a worthy adversary for any of the trendy restaurants in the wider Manchester region. When Bakerie decided to open Pie & Ale next to it with a communal kitchen, they effectively had a black canvas. The restaurant was created with the earthier appeal of a pint and a pie in mind. Both items are house-made, with the home-brewed Yippie Pie Ale alongside 8 local cask ales on tap rotation together with a selection of fifty international craft beers. The ales are served in a wood-dominated, airy, understated area. There are no preconceived notions of what a pie store ought to be and once you visit Pie & Ale, you will remain none the wiser.

Pie & Ale lies inconspicuously in the half-open arcade owned by The Hive. You may have a hard time locating Pie & Ale once you’ve had more than 3 pints. So, if you intend on visiting Pie & Ale, it might be a good idea to start your first pint there rather than your fourth. The generous incorporation of pavement tables at Pie & Ale offers alfresco opportunities.

As you make your way towards the bar through the main entrance, it seems as if you have accidentally wobbled into the kitchen and got the opportunity to get a sneak-peak of the meals being prepared for eligible diners. As far as first impressions go, the Pie & Ale restaurant offers quite a memorable one.

The sweet aroma of freshly-baked bread and steaming pies that have just come out of the oven with glistening pastry greet you at the door. It’s only the hip environment at Pie & Ale that prevents each customer from bursting into a chorus of “fooood…Oh, glorious foooood” as they walk in.